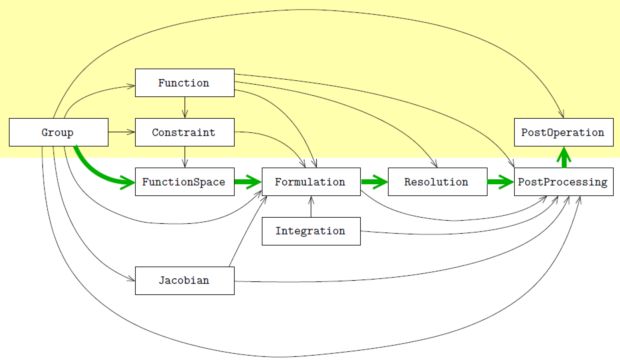 The powerful capability 'Individual Physics' allows the advanced user defining his own special physical formulations, solve for them in Magnetics and exploit all the excellent tools provided by NX / Simcenter.

By using such individual formulations the user can for example put his own postprocessing equations into existing solutions. Maybe there are developed very special formulas for losses calculation depending on the B-field the user can include such formulas and get the results written into the usual NX / Simcenter plot or table result files. This capability takes advantage of the GetDP programming language that provides numerical tools as they are quickly described on this page. More documentation to GetDP can be found here.

A physical problem is described by numerical objects. These objects are described in one or more text files written by the preprocessor in Magnetics for NX/Simcenter. Users who want to take advantage of individual Physics can add, remove or overwrite the default formulations.

Let’s have a view on the formulation object. The user can directly give the partial differential equation (PDE) of his physical problem in weak form to the system:
Maxwells equations for statics are:

Vectorpotential form (results from div b = 0):

b = curl a
a: Vectorpotential

Weak form in classical notation (results from some algebra on the above equations):

It can be seen that the formulation object contains the terms of the equation. Each line contains one term.

One additional term in the formulation is needed:

A new resolution for this formulation would be: